Once upon a time, seated in a stuffy university classroom during an autumn downpour, a young man daydreamed of color and light while his professors pedantically extolled upon virtues of writs for torts. On this day like many, he desperately wanted to escape the drone of words to experience his visions, beautiful and sacred. As the seasons passed, this pattern repeated, and all colors faded from his visions while he sat amongst piles of musty books, feverishly studying for exams filled with “fighting words”, for which he saw no other purpose than to sharpen the blade of man’s darkest nature.

Voluntarily imprisoned, conforming to others’ ideals, which were his invisible shackles, he yearned to be surrounded by artifacts and nature, the places where he saw God most clearly. He knew how to harness its’ potential to show people that indeed, life can be more far more beautiful and inspired! But, how to disappoint his father, who worked so diligently to give his son the opportunity to study law and become a “proper” professional, which would naturally bring greater respect to his entire family.

When he finally did break free of the shackles of convention, he did it in a most extraordinary manner…

On that fine day, he approached his father for the most difficult, yet most important conversation of his life to date. Although it felt like a cruel conversation to have, in retrospect, he would live out the rest of his life wishing that he would have had it sooner.

That day, he gently approached his father and informed him that he, out of respect for his father’s hard work and aspirations, maintained his promise to become a lawyer. However, he could not bear living a life that was not his. He, after all, was an artist – there was never a doubt. His appeal was succinct. It did not leave space for argument… he had seen out his training as a lawyer for this very moment! It was the trial of his life, and the only one he had previewed in his mind countless times over the years.

It was a sunny August day in 1874 in what was then known as the Périgord, France. And, it had been only one single week since Maître Louis Bourdery commenced practicing law as a qualified lawyer in the Limoges Court of Appeals. This is the story of how Maître Marie-Gabriel-Louis Bourdery esquire, became artisan Louis Bourdery, and began his life… His life on-purpose.

Finally navigating his way unapologetically to his true calling and despite his lack of formal training, Maître Bourdery’s star rose rapidly, and he quickly gained notoriety for his use of bold color and lush detail in religious art, becoming of the era’s more recognized master enameliers. His bright blues and heady yet strikingly delicate gold detailing hearkened back to the last byzantine-inspired masterpieces of Italian pre-renaissance art. It would not be out of place in 14th century Siena, Italy.

Master Bourdery’s love to inspire awe in people and his fondness of architecture led to his desire to create his family’s own sanctuary at Oche, a stone hunting lodge constructed on the remains of a habitation dating back to 1491 and owned by the Barons of Oche. Born in the area on April 24, 1852 he would have passed Oche, an already imposing structure, as a child. Little did he know that at Oche, he too would become nobility, being Knighted by the Vatican for his contribution to religious art. Even now, hundreds of years later, his name adorns streets in France – a show of gratitude for a decision well-made to follow his own path.

For the rest of his life, Master Bourdery continued his ascent in the art world while experimenting, reimagining and expanding Oche to incorporate his passion for gothic architecture and to celebrate family milestones – making Oche into the quirky grandiose country house that it is today. Oche’s last wing built by Bourdery was finished in 1883, complete with towers built to immortalize the birth of his children, and an ancient gothic doorway as a nod to his beloved history books. His workshop still stands on the grounds, as does his burial chapel.

Although Master Louis Bourdery passed on July 27th, 1901 (and likely at 5:19am given that most of us who sleep at Oche are inexplicably awoken at this time on a daily basis) his legacy lives on though his art, historical publications, and skilful artwork still seen at Château d’Oche. 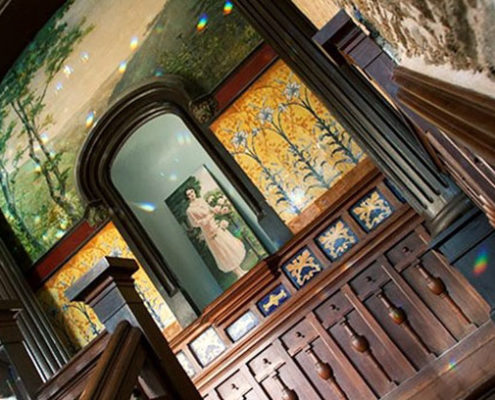 Upon the death of her loving father, Dame Blanche Bourdery –pictured here in her self portrait– began immortalizing her father and their life together through her own paintings and enamels that adorn the grand staircase and chapels. This remains with us as an everyday reminder of the labor of love her family undertook the entirety of their lives. 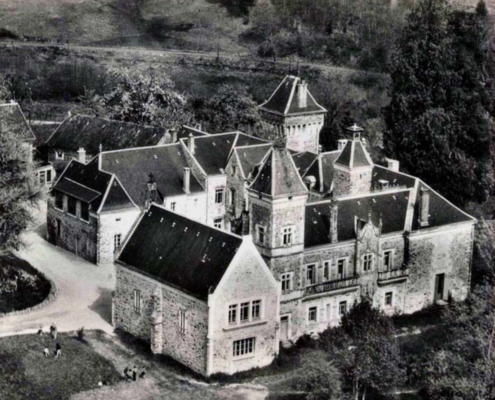 Master Bourdery was not the only artist in his family. All but one of his children became architects and artists, and his family’s impressive and unusual work can be also seen at the trumeau of one of the chimneys, once again bringing to life the past of this historical building.